Nowadays, you can purchase a Barbie to suit every situation, ranging from very basic models right through to top-of-the-range versions featuring everything that opens and shuts. If you haven’t already bought one, take the time to shop around and match your needs with the features available.

Before you shop, you may wish to decide on what type of Barbie you are after – gas or charcoal. Gas barbecues are instant, clean and easy to control. They are the most popular, as well as the more expensive. Most units have at least two burners, making it possible to cook meat over high direct heat while simultaneously cooking vegetables over low direct heat. Some have a fitted hood, offering the option of cooking with indirect heat.

Built charcoal barbecue grills suit people who enjoy the flavour and experience of cooking over charred wood. Although they are cheaper to buy than gas and electric barbecues, they take longer to reach cooking heat and are messy to clean.

Built gas barbecue grills use one of two types of heat conductor, lava rocks or ceramic rocks, arranged over a mesh framework fitted above the burners.

Lava rocks are porous, medium to large chunks of volcanic rock that absorb heat and add flavour. The rocks can be removed and washed, then dried in sunlight before replacing them in the barbecue. 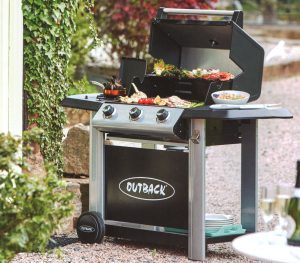 Ceramic rocks (sometimes called compressed lava rocks) are non-porous, disc or pyramid shapes made from a compound that includes lava rock in its makeup; they hold heat well. Ceramic rocks can be cleaned by turning them cooking-side-down and allowing the gas burners to burn off any residue that collects.

Most gas barbecues are fitted with a slide-out draining tray that holds fat soak or fat absorber. The base of the tray should be lined with foil then sprinkled evenly with fat soak or absorber. Check the tray regularly and replace the fat absorber when necessary, as accumulated fat can cause flare-ups. Most barbecues have a grease receptacle that must be emptied regularly to avoid flare-ups.

Charcoal, as a heat conductor, is available in hardwood or lumpwood form. Natural charcoal, most commonly made from mesquite or other kinds of hardwood, starts more quickly, burns with about twice the heat of briquettes and smells cleaner. 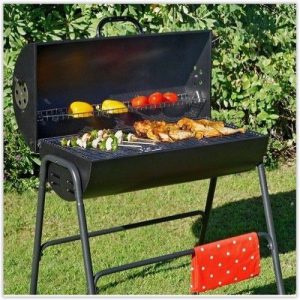 Briquettes and heat beads are manufactured from ground charcoal with the addition of a little coal dust and starch to help bind the mixture. Heat beads burn longer than charcoal, but both burn for a reasonable length of time and distribute the heat evenly.

Wood is unpredictable as a heat conductor and difficult to control. It must be lit long before required for cooking to produce the bed of glowing embers that retain enough heat to complete cooking (adding more wood produces flames and smoke, which gives food an unpleasant taste).

Treated wood should never be used as a fuel when barbecuing and food.

The fire is ready when the coals are covered in a layer of white ash. You should be able to hold your hand about 15cm from the cooking rack for three to four seconds; if you cannot, the fire is too hot. If you can and don’t feel any heat after a few seconds, the source has either gone out or it has not yet reached the correct cooking temperature.

How much charcoal to use?

For cooking over direct heat, one layer of charcoal should cover an area slightly larger than the food. For indirect heat, use twice the depth of coals, as they will need to burn for a longer time.

There are two main methods you can use when cooking on a barbecue:

1. Direct Heat: also called direct cooking, direct method or open grill. This is the traditional method, where the food is placed on the barbecue grill or plate and cooked directly over the heat source. This is the best method for sausages, steaks, burgers, vegetables, and so on.

A rotisserie may be used with the direct method over low burners (gas) or with an enamel baking dish below the roast (charcoal) to minimize flare-ups. Food can also be wrapped in foil to protect it when using direct method.

2. Indirect Heat: also called covered cooking or kettle cooking. With gas, the food is placed in a preheated, covered barbecue with the burners directly under the food turned off while the side burners remain on. With charcoal, charcoal rails (metal bars) hold two stacks of coals against the barbecue’s sides, leaving the centre of the barbecue rack empty. A disposable aluminium drip tray can be placed here, if desired. The food is cooked by the circulating hot air as well as ty the heat conductors. This method of cooking is good for large pieces of food because it ensures the food cooks all the way through without drying out. It is also suitable for smoking and slow-cooking.

You can also use a combination of both methods. Thick steaks or pieces of chicken, for instance, can be seared first using direct heat, then covered and cooked using indirect heat for more even cooking and juice retention.

Smoking is a cooking style in which the flavours of the food are affected by the choice of wood used. Hicktory and mesquite are the best known woods for smoking; however, there are many different varieties available, such as Applewood, tea tree, cherry, peach or banksia. Wood chips have to be soaked first in cold water so that they will smoulder slowly over the fire, rather than burning. For additional flavours and scents, soak a variety of herbs and spices in the water along with your choice of wood chips.

Smoking is best suited to moderate-to-slow cooking. Instead of placing the soaked wood chips or chunks and the herbs directly onto the open flame where they burn too rapidly, put them in a smoke box to combust slowly without causing flare-ups or unnecessary ash. During preheating, place the filled cast-iron smoke box over the heat source. When smoke appears from within the box, adjust the burners on a gas barbecue to low. If using a charcoal barbecue, place the smoke box directly under the food and use indirect heat.

For best results when smoking, try not to interrupt cooking with frequent opening or removal of the lid. For this reason, bear in mind that basting too frequently will lessen the intensity of the smoky flavour you want to achieve.