Sweet pomegranate is hot and wet, good for the stomach, and strengthens it because of its being a mild constipating agent. It is also good for the throat, chest and lungs, along with relieving coughing. 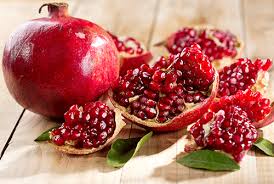 The water (or juice) in the pomegranate softens the stomach and is a nutrient for the body. It also digests quickly because it is light and produces heat along with some air in the stomach.

It helps increase the semen production and is not favourable for those who have fever. Pomegranate has a special quality, that is, when one eats bread with it, it prevents it from being spoiled.

Bitter pomegranate is cold and dry and constipates mildly. It is also good for overheated stomach and helps produce more urine than the other types of pomegranate. It also softens bile symptoms, relieves diarrhea, prevents vomiting and is slightly tarry. It also stops the heat in the liver, strengthens the organs, helps against bilious shaking, heartaches and the ache of the tip of the stomach. It also helps the stomach and rids it of excrements and extinguishes the bile and benefits the blood. 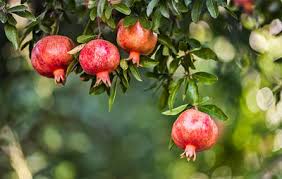 When pomegranate’s juice is extracted and is cooked with some honey until it becomes like an ointment and used as eye drops, it will clear the yellow colour from the eye and will dissipate the thick wetness. When it is placed on the gingival (gums), it will help against the rashes that appear on the gingival. Also, pomegranate juice extracted with the rind will work as a laxative and will rid the body from septic bilious moistures, along with helping against short-term fever.

As for sour pomegranate, its qualities are in the middle between the two other kinds we mentioned, although this kind leans more towards being sour. Pomegranate seeds that are mixed with honey will alleviate septic finger and malignant ulcers. Pomegranate flowers also help heal wounds. It is said that if one swallows three pomegranate flowers each year, he will be immune from ophthalmia (conjunctivitis) for an entire year.